Home » TYPES » Herbs » Gomphrena celosioides
Back to Category Overview
Total images in all categories: 11,506
Total number of hits on all images: 6,488,420 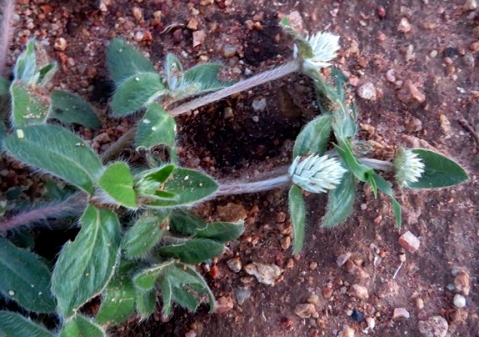 Gomphrena celosioides, commonly known as bachelor’s button or in Afrikaans mierbossie (little ant bush), is an exotic from South America. The perennial herb grows many branches spreading on the ground from a woody rootstock. Long silky hairs are present on the stems and leaves.

The opposite leaves of G. celosioides are nearly stalkless. Leaf shape is oval with entire margins that taper to acutely pointed tips. Hairiness upon the dark green leaves is less on the upper surface than below and on the margins. The pale midrib is conspicuous, a few ascending lateral veins are sunken on the upper surface, or the blade sections between the veins bulge above.

The terminal, globular inflorescence gradually elongates as it develops. It comprises small, stalkless white flowers with papery segments that are woolly on the outside. Flowering happens in spring and summer.

The species, a weed in South Africa, is widely distributed. The photo was taken in the Mjejane Game Reserve in December (Van Wyk and Malan, 1997; iSpot).