Home » TYPES » Herbs » Glumicalyx nutans
Back to Category Overview
Total images in all categories: 11,419
Total number of hits on all images: 6,200,117 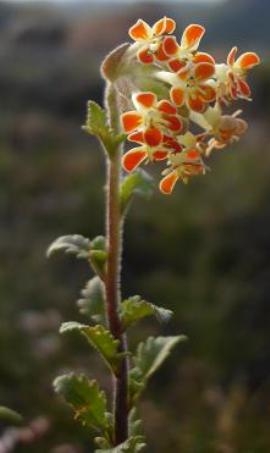 The Glumicalyx nutans cluster of cream-coloured flower tubes with prominent brick red petal lobes make for an attractive flower. They occur on multiple erect stalks above the characteristic small leaves of the plant.

The species occurs mainly in Lesotho and the adjacent Drakensberg of Eastern Cape, the Free State and KwaZulu-Natal.

The habitat is grassland at medium to high elevations receiving summer rain. The species is not considered to be threatened in its habitat early in the twenty first century (http://redlist.sanbi.org).