Home » TYPES » Herbs » Glumicalyx lesuticus
Back to Category Overview
Total images in all categories: 11,419
Total number of hits on all images: 6,200,249 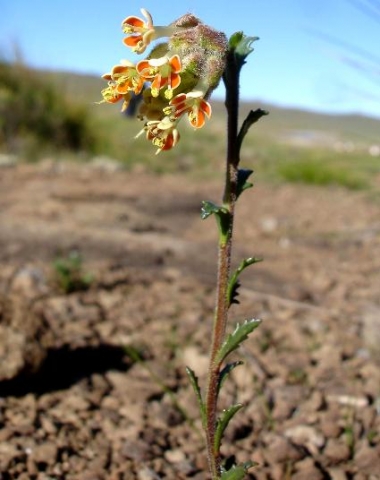 This picture of Glumicalyx lesuticus shows a single stem flowering during January. The plant grows several erect stems from its stout rootstock. The one visible here is hairy and purplish red. The leaves seen in the picture are alternate, sessile and narrowly obovate to elliptic with shiny, dark green surfaces and serrated margins.

The flowers grow in compact, rounded, head-like spikes at stem tips. The green and purple calyx lobes are densely covered in whitish hairs. The corolla tube and outside surfaces of the corolla lobes are creamy to white. The inside or upper corolla lobe surfaces are bright orange with cream showing on the margins. The corolla has five lobes, oblong to broadly ovate, rounded at the tips. The stamens with their yellow anthers can be seen to be well exserted.

The distribution of the species lies in this easterly border area of Lesotho, near the Sani Pass. The plant is common on disturbed bare patches and among rocks at high altitudes. The photo was taken in the Mkhomazi Wilderness Area in the Drakensberg (JSTOR).