Home » TYPES » Herbs » Glumicalyx goseloides
Back to Category Overview
Total images in all categories: 11,411
Total number of hits on all images: 6,181,726 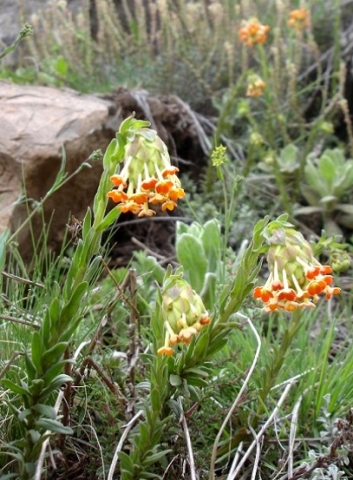 Glumicalyx goseloides has leaves covered in glandular hairs. Their flowers grow in compact, nodding head-like spikes. The plants produce nectar near the ovaries at the base of long, thin flower tubes, probably reserved for specialist, long proboscis pollinators.

The species grows among the rocks high up in the Drakensberg of the Free State, the Eastern Cape and KwaZulu-Natal, as well as the adjacent Malutis of Lesotho. The plant is not considered to be threatened in its habitat early in the twenty first century.

The genus comprises six species of dwarf shrublets and perennial herbs in southern Africa, mainly in and around Lesotho (Manning, 2009; iSpot; www.gateway.myspecies.info; http://redlist.sanbi.org).