Home » TYPES » Herbs » Glumicalyx flanaganii
Back to Category Overview
Total images in all categories: 12,081
Total number of hits on all images: 7,379,058 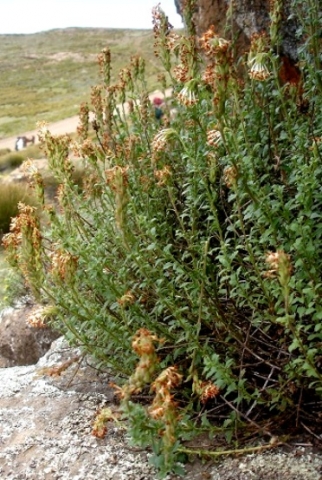 Glumicalyx flanaganii or Flanagan’s gooseneck flower is a perennial herb growing to 60 cm in height and spreading. The stems are covered in downward facing hairs. The leaves are elliptic to oblong with toothed margins and sparsely hairy.

G. flanaganii is found at high altitude in the Drakensberg and especially the Maluti Mountains. This is more a flower of Lesotho than of South Africa, as it just “overflows” slightly into each of the three provinces that surround Lesotho (KwaZulu-Natal, Free State and the Eastern Cape). The habitat is damp spots and watercourses in montane grassland.

This plant that was called Zaluzianskya flanaganii before, is not threatened in its habitat early in the twenty first century (Manning, 2009; www.redlist.sanbi.org).