Home » TYPES » Herbs » Gisekia africana var. africana
Back to Category Overview
Total images in all categories: 12,081
Total number of hits on all images: 7,379,169 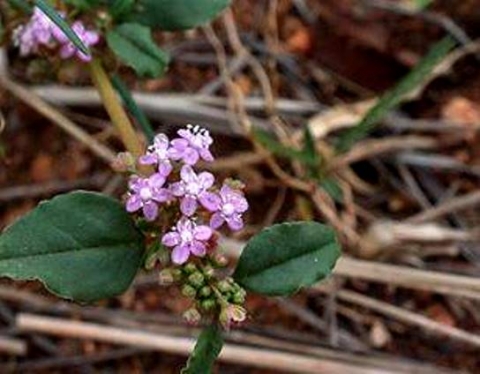 Gisekia africana var. africana, in Afrikaans commonly known as rooi-rankopslag (red ramble or twine regrowth), is an annual or perennial herb, growing thin, prostrate or procumbent branches up to 50 cm long, often tinged red. There are two species of Gisekia in South Africa and G. africana has two varieties occurring here, apart from others elsewhere.

The variably elliptic leaf is stalked, dark green with a sunken midrib; somewhat succulent. The small flowers grow in umbel-like clusters from stem-tips or nodes, pale to deep pink sometimes tending to pale purplish. The flower has five spreading petals and usually from ten to fifteen stamens.

The distribution of this variety is widespread in South Africa apart from the two southerly provinces as well as in tropical Africa and Asia.

The habitat is varied, often arid and hot in summer, the plants growing in the open. The plant is not considered to be threatened in its habitat early in the twenty first century (Smith, et al, 2017; iNaturalist; http://redlist.sanbi.org).