Home » TYPES » Herbs » Gerbera viridifolia
Back to Category Overview
Total images in all categories: 11,506
Total number of hits on all images: 6,492,063 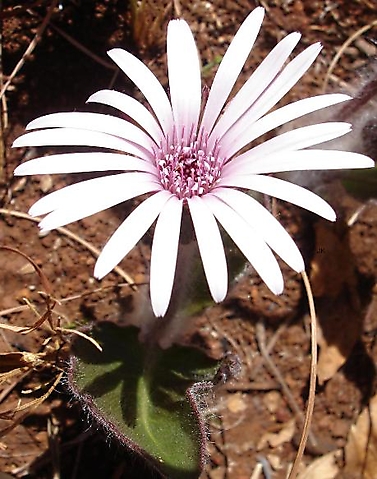 Gerbera viridifolia, commonly the blushing Barberton daisy, is a stemless, tufted perennial reaching 35 cm in height when flowering. It tends to form colonies.

The stalked leaves are fairly erect in their rosette. Leaf-shape is mostly elliptic, the blades sometimes hairy on both surfaces, more so above. In picture the visible leaf is particularly long-haired on its dull purple-maroon margin. The blade is dark green, the pale midrib conspicuous in its lower part and the margins about entire.

The flowerheads grow solitary on long scapes without bracts. The single whorl of ray florets around the central disc is white, pink or purple, rarely yellow and usually pinkish purple below. Flowerhead diameter is up to 4 cm. Flowering happens in spring to midsummer.

The species distribution is from the Eastern Cape to Limpopo in the eastern parts of South Africa and further in Africa. The plant is known in East Africa where it grows at altitudes to about 2400 m. The photo was taken early September near Roossenekal.

The habitat is grassland and wooded grassland. The species is not considered to be threatened in its habitat early in the twenty first century.