Home » TYPES » Herbs » Geranium multisectum leaves
Back to Category Overview
Total images in all categories: 10,175
Total number of hits on all images: 4,839,782 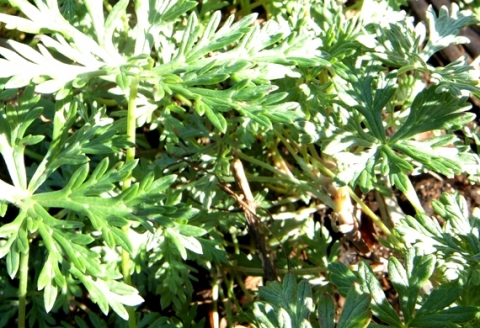 Geranium multisectum is an evergreen perennial that forms a spreading leafy mound on the ground, up to 30 cm high. Only a few of the lowest stems will become woody on mature plants; the soft branches are covered in white hairs.

The dark green to blue-green leaves are much divided into nearly linear segments, explaining the adjective, multisectum, of the species name that comes from Latin and means many divisions. Some red colouring is seen on the leaves (and upper branches that also carry glandular hairs), while lower leaf surfaces are pale grey.

The species is distributed is in the east of the country, growing in open marshy areas from the Eastern Cape to Mpumalanga, also to the tropical north in Tanzania (www.plantzafrica.com; JSTOR).