Home » TYPES » Herbs » Geranium incanum, the white variety
Back to Category Overview
Total images in all categories: 10,175
Total number of hits on all images: 4,840,027 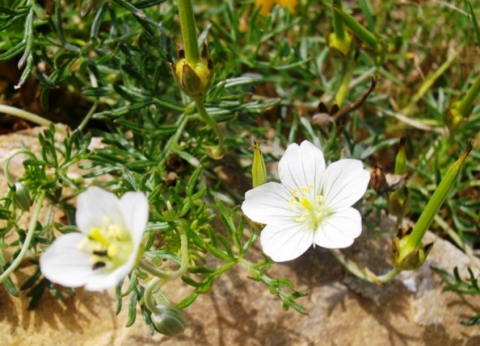 Geranium incanum usually has pink or mauve flowers. The white form does, however, represent a recognised variety, viz. G. incanum var. incanum that is white, but also sometimes pink. A low-growing perennial herb, the plant creeps or scrambles by means of its many soft branches, divided at the base above the taproot. The plant forms a mat, growing in full sun or semi-shade; a garden favourite.

The leaf of G. incanum is deeply lobed or divided into a delicate feathery structure that usually has fine hairs on its lower surface.

The flowers are radially symmetrical, i.e. actinomorphic. The five petals are dark-veined from the centre, like wheel spokes. The fruit is said to resemble the beak of the crane. This bird, called geranos in Greek, brings the plant its generic name of Geranium. Crane is to Geranium what stork (pelargos in Greek) is to Pelargonium: Each of these two plant genera bears fruit resembling the beak of the particular bird of its generic name.

The distribution of G. incanum ranges from Malmesbury in the west along the coastal zone to Port Elizabeth and up into tropical Africa. Flowering time is end winter through spring.