Home » TYPES » Herbs » Foveolina dichotoma
Back to Category Overview
Total images in all categories: 11,506
Total number of hits on all images: 6,493,856 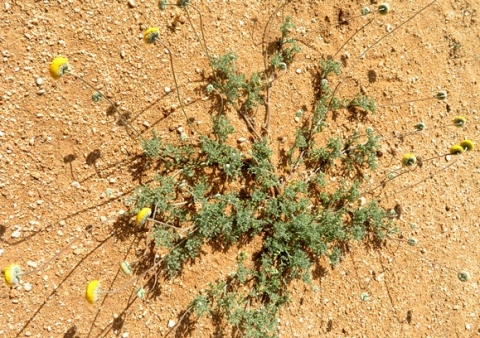 Foveolina dichotoma, in Afrikaans commonly known as knoppiesopslag (little knobs regrowth), stinkkruid (stink herb) or gansogies (little goose eyes), is a silky, spreading annual reaching from 20 cm to 30 cm in height. The Foveolina genus is generally known as wild chamomile. Branching from the base, the stems trail or are sub-erect.

The species distribution is in the Northern Cape, the Western Cape and the Eastern Cape. The plants grow in arid regions on sandy flats and slopes. The species is not considered to be threatened in its habitat early in the twenty first century (Le Roux, et al, 2005; iNaturalist; http://redlist.sanbi.org).