Home » TYPES » Herbs » Dicoma capensis or karmedik
Back to Category Overview
Total images in all categories: 11,662
Total number of hits on all images: 6,774,760 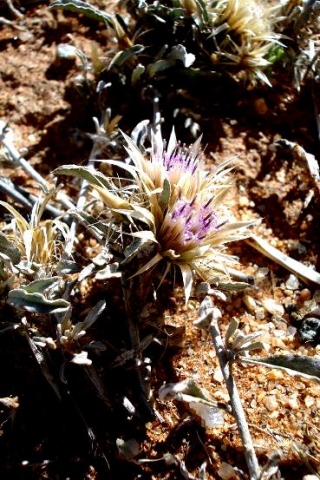 Dicoma capensis is a small perennial herb with trailing branches growing from a woody rootstock. The leaves are variable in shape, narrow, oblong to obovate and whitish from their hairy covering. The leaves in picture are grey, folded in along the midrib, the tips rounded.

The flowerheads are thistle-like, purplish in colour on the disc, surrounded by several rows of narrow, hairy, spine-tipped bracts that curve outwards.

The plant is but one of several Dicoma species used extensively in traditional medicine.  It is commonly known as karmedik (Scottish thistle) or in Afrikaans as koorsbos (fever bush) or ver-pis (urinate far).

The medicinal uses include the concocting of tea-like remedies for various types of fever and bladder conditions. The last common name might imply that one can urinate far if the medicine works (Van Wyk and Gericke, 2000; Manning, 2009; Pienaar, 2008; www.faithdrops.mu).