Home » TYPES » Herbs » Crotalaria humilis
Back to Category Overview
Total images in all categories: 10,690
Total number of hits on all images: 5,351,937 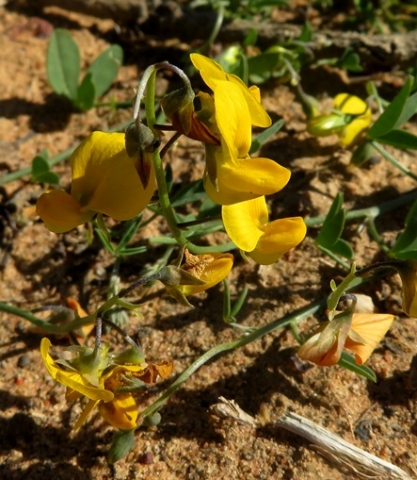 Crotalaria humilis, in Afrikaans commonly known as sandklawer (sand clover), is a deep-rooted, much branched, mostly trailing perennial. It grows creeping, thread-like stems up to 20 cm long that are sometimes hairy.

The species distribution is in the Northern Cape and Western Cape, from Namaqualand to the Olifant’s River valley. The photo was taken south of Vanrhynsdorp.

The plants grow on flats in sandy soils. The species is not considered to be threatened in its habitat early in the twenty first century.

About 600 Crotalaria species exist worldwide in the tropics and subtropics, about a tenth of them in South Africa (Le Roux, et al, 2005; iNaturalist; http://redlist.sanbi.org).