Home » TYPES » Herbs » Crossandra mucronata
Back to Category Overview
Total images in all categories: 12,086
Total number of hits on all images: 7,381,143 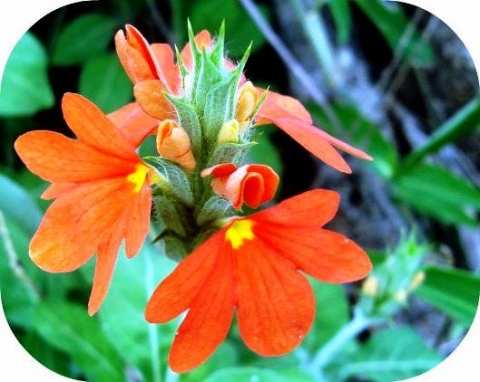 Crossandra mucronata is an erect, clump-forming perennial that reaches 30 cm in height. The stalked, elliptic leaves are mostly basal. The margins are entire and wavy, the midribs and spaced, ascending lateral veins whitish across the dark green to dull green blades.

The flowers grow in short, compact spikes among hairy, green bracts, overlapping and spine-tipped at the stem-tips. The specific name, mucronata, may be earned on account of these mucronate bracts.

The flower is one-lipped with a long slender tube. Flower colour is pale apricot to deep orange-red. The lip is divided into five obovate, round-tipped lobes with a bright yellow spot on the lobe-bases at the corolla mouth. The corolla is from 18 mm to 26 mm in diameter.

The four stamens are concealed inside the tube. Flowering happens from late spring to early autumn, extending for long and attractively on the plant. The generic name, Crossandra, is derived from the Greek words krossoi meaning fringe and andros meaning a male, referring to the fringed anthers of plants of the genus.

The species distribution is in Mpumalanga and Limpopo, as well as from Mozambique and Zimbabwe through East Africa to Somalia.

The plant grows in open, grassy woodland and mopaneveld. The plant is not considered to be threatened in its habitat early in the twenty first century.