Home » TYPES » Herbs » Crossandra greenstockii
Back to Category Overview
Total images in all categories: 11,921
Total number of hits on all images: 7,168,556 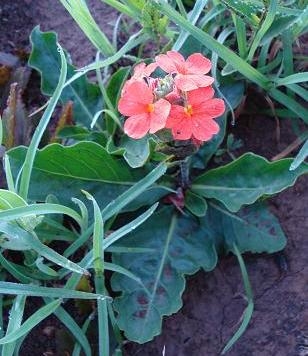 Crossandra greenstockii, the bushveld crossandra is a perennial reaching 30 cm in height from a woody rootstock. The flower stalks emerge erectly from basal rosettes of broad green, unevenly lobed leaves. The orange petals spread around a yellow flower centre. The flowering season is long, from midspring to early winter.

The species distribution is in the northeast of South Africa, in Limpopo, Gauteng, Mpumalanga and KwaZulu-Natal, as well as in some neighbouring countries, as far north as Malawi. The habitat is grassland and woodland. The species is not considered to be threatened in its habitat early in the twenty first century.

This is a commonly traded garden plant grown from seed. It belongs to the Acanthaceae family. There are 52 Crossandra species of which four occur naturally in southern Africa (Manning, 2009; Pooley, 1998; http://redlist.sanbi.org).