Home » TYPES » Herbs » Craterocapsa tarsodes
Back to Category Overview
Total images in all categories: 12,081
Total number of hits on all images: 7,379,218 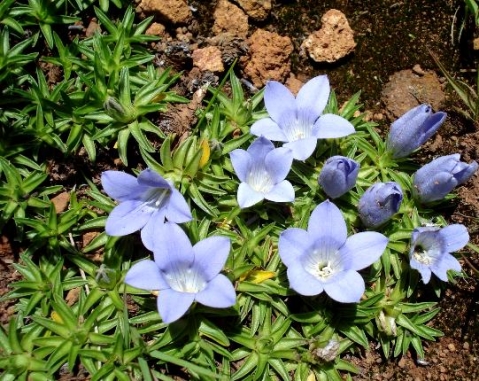 Craterocapsa tarsodes, commonly known as one of the carpet bellflowers, is a mat-forming perennial herb of the eastern inland grassland of South Africa. Found from the Eastern Province to Limpopo, it also grows in Lesotho, Swaziland and Zimbabwe. The habitat is typically shallow soil in high altitude grassland of the Drakensberg area, particularly rocky spots.

The prostrate, creeping and branching stems present rosettes of stiff lanceolate to oblanceolate leaves with tiny marginal teeth. Clusters of pale blue or white bell-shaped, sessile flowers face upward, based upon hard calyx lobes. The five petals form a cup around the early disappearing stamens that spread around the style with its three-lobed stigma. The upper petal parts open into a star-shape outside the corolla mouth, rounded in shape towards their inconspicuously pointed tips. Flowers reach about 2 cm in diameter. They can be seen from late spring through summer (Manning, 2009; www.zimbabweflora.co.zw).