Home » TYPES » Herbs » Craterocapsa congesta flower
Back to Category Overview
Total images in all categories: 11,506
Total number of hits on all images: 6,491,705 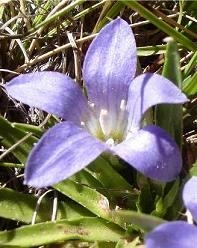 Craterocapsa congesta is a dense, prostrate, herb belonging to the Campanulaceae family. There are five South African species in the genus. The generic name, Craterocapsa means cup-shaped capsule.

The taprooted plant produces a profusion of attractive short-stemmed flowers. The bell-shaped corollas have five pointed petals with outcurving tips.

The species is distributed in the Eastern Cape and KwaZulu-Natal as well as in some neighbouring countries. The habitat is subalpine grassland. The species is not considered to be threatened in its habitat early in the twenty first century (http://redlist.sanbi.org).