Home » TYPES » Herbs » Cleome macrophylla
Back to Category Overview
Total images in all categories: 11,779
Total number of hits on all images: 6,931,801 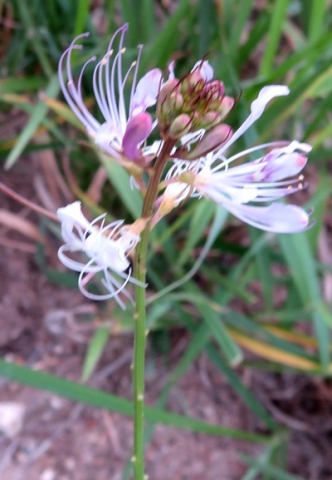 Cleome macrophylla, sometimes called the large-leaved spindletop, is an erect annual reaching heights from 20 cm to 40 cm. When young the stems may be sparsely hairy.

The inflorescence is a dense stem-tip raceme. The flower stalks are short, as are the thin, simple bracts under the flowers. The four, unequal sepals may become up to 8 mm long.

The four petals are oblong to spoon-shaped, the petal base claw-shaped. The upper petals may have a yellow mark in the middle, surrounded by a purple line. The petals may be from 8 mm to 14 mm long. There are from six to twelve whisker-like stamens, some infertile or bearing small anthers. The raceme elongates when the fruits are forming.

The species distribution in South Africa is in the Mpumalanga and Limpopo Lowveld and the north of KwaZulu-Natal. The bigger part of the distribution lies in the tropics in Mozambique, Zimbabwe, Zambia, Malawi and Tanzania. This plant was seen near the Crocodile River in the Mjejane Game Reserve.

The habitat is open woodland where the plants grow in sandy soil. The species is not considered to be threatened in its habitat early in the twenty first century (JSTOR; iNaturalist; http://redlist.sanbi.org).