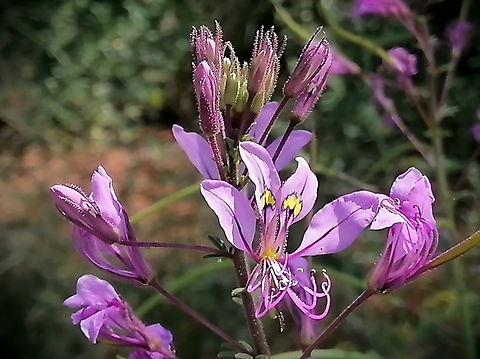 Cleome hirta, commonly known as the sticky spindle-pod, is an erect annual growing sparingly branched stems to heights around 1,5 m. The wand-like stems are glandular-haired, becoming woody low down.

The aromatic leaves are digitately compound, each comprising five to nine oblong to lanceolate leaflets. The leaves are also glandular-haired, growing on long petioles. The specific name, hirta, is a Latin word meaning hairy.

The inflorescence is a leafy, stem-tip raceme of pink-purple flowers. Four long, thread-like sepal lobes covered in glandular hairs are erect around the buds, forced to spread in the open flowers. The clawed, paddle-shaped petals are paler towards their bases. The middle pair of the four petals is larger with yellow blotches in the centre, fringed by dark lines. A dark purple, longitudinal line is present in the centre of each petal.

Flowering happens throughout the year.

The spindle-shaped to nearly cylindrical pod dehisces when ripe, releasing the seeds.

The species distribution is in Limpopo, Gauteng and Mpumalanga, as well as in several neighbouring countries and further in tropical Africa. The photo was taken in the Blouberg Nature Reserve in Limpopo.

The habitat is savanna and scrub, the plants growing in sandy soil. The species is not considered to be threatened in its habitat early in the twenty first century (Manning, 2009; Onderstall, 1996; Germishuizen and Fabian, 1982; iNaturalist; http://redlist.sanbi.org).