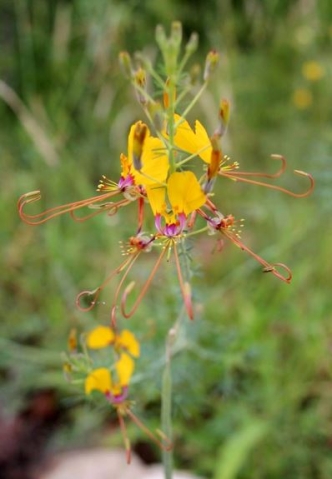 This photo of Cleome angustifolia subsp. angustifolia shows long-stalked flowers in a lax raceme. It was taken in the north of Limpopo.

The pair of upper petals of each flower are bright yellow in their wider, upper parts, purple in different shades on the lower, narrowing or clawed parts. On the old flowers lower down in the raceme the petals have already dropped off, exposing whitish green, narrowly pointed sepals. There are four of them per flower, all strongly reflexed.

The sepals are visible behind the developing ovary upon which some stamens and styles still persist. Fertile stamens are long and roundly curving back like fish hooks, the rest smaller and whisker-like.