Home » TYPES » Herbs » Cleome angustifolia subsp. petersiana
Back to Category Overview
Total images in all categories: 11,792
Total number of hits on all images: 6,949,165 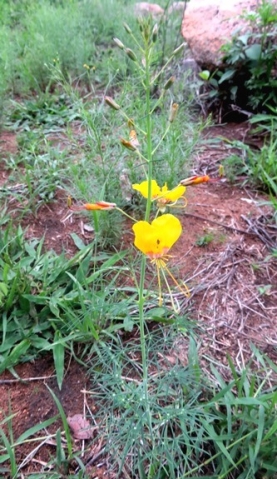 Cleome angustifolia, commonly called yellow mouse-whiskers on account of its stamens and in Afrikaans peultjiesbos (little pods bush) on account of its fruits, is an annual herb that grows erectly to 1,5 m. Its thin stems are wand-like, covered in tiny, scattered protuberances, conical and whitish.

The deep yellow flowers on long, thin, straight stalks are laterally symmetrical or zygomorphic, growing in a slender, sparsely flowered raceme, up to 30 cm long. There are pale purple markings visible in picture at the base of the pair of larger obovate petals. The other two petals are small, hardly visible. The flower diameter is about 2 cm.

The stamens protrude from the flower base, curving strongly up and back near their tips and ending in claw-like, curved anthers, thin and dull-coloured that point back towards the petals. There are also short, straight staminodes, sterile stamens present.

The flowers close by midday. Flowering commences in late spring, continuing to early winter. The flowers are followed by long, thin, cylindrical pods.

The species distribution is widespread across the northern part of South Africa, from Komatipoort to the lower Gariep River. The distribution continues widely into tropical Africa, at least to Kenya and Ethiopia. This plant was seen in the Mjejane Game Reserve in the east of Mpumalanga December. The subspecies is found in South Africa in Limpopo, Mpumalanga, KwaZulu-Natal and North West.

The habitat is savanna, bush-land, open scrub and even semi-desert below elevations of 1150 m. The plant may become a weed on stony ground in parts of tropical Africa. The subspecies is not considered to be threatened in its habitat early in the twenty first century.