Home » TYPES » Herbs » Cineraria geifolia leaves
Back to Category Overview
Total images in all categories: 11,523
Total number of hits on all images: 6,599,576 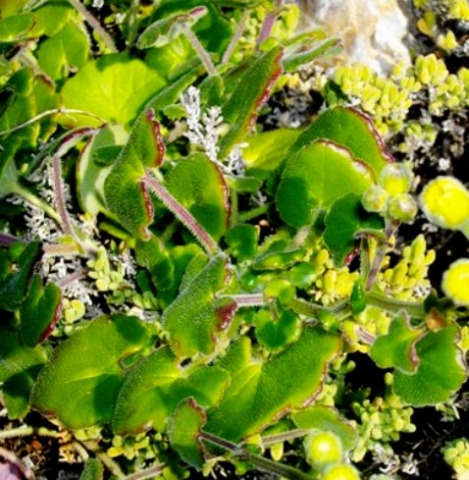 The leaves of Cineraria geifolia have a kidney-shape, rounded with large lobes at the base. The margins are variously and sometimes irregularly lobed, angular, scalloped or toothed. Leaves have long stalks that are finely hairy and with notable ear-shaped stipules at the base of the stalks. Leaf surfaces are fleshy, sometimes shiny; they have a sparse covering of tiny hairs as well as indentations on the upper surfaces along the veins. The lower leaf surfaces are more hairy.

The specific epithet geifolia reflects a resemblance of the leaf to that of one of the aven plants, a species in the worldwide Geum genus that comprises rhizomatous herbs in the Rosaceae family. Some avens are edible, others are used in herbal medicine. The Greek word, geiton that gave Geum its name, means neighbour (Manning, 2007; Clarke and Mackenzie, 2007; Mustart, et al, 1997; Andrew, 2012).