Home » TYPES » Herbs » Chlorophytum triflorum
Back to Category Overview
Total images in all categories: 11,523
Total number of hits on all images: 6,599,375 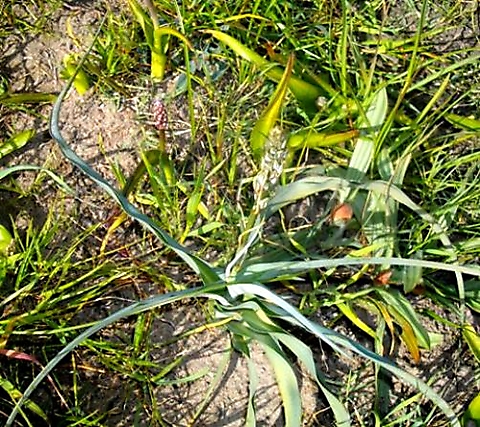 Chlorophytum triflorum, in Afrikaans commonly known as gifkool (poison cabbage), is a rhizomatous perennial reaching heights to 1 m. It grows from hard, dark grey roots that taper to their tips.

The long, narrow leaves are glaucous, growing in a basal rosette. They are channelled, arching out and tapering to thread-like tips. The leaf margins are often fringed.

The species is distributed along the west coast in the Western Cape. The photo was taken in the Tinie Versfeld Wildflower Reserve. The habitat is sandy or loamy flats and slopes. The species is not considered to be threatened in its habitat early in the twenty first century.

Chlorophytum family connections may be in flux among Agavaceae, Anthericaceae and Asparagaceae, the first one probably current (Manning, 2007; Manning and Goldblatt, 1996; iNaturalist; http://redlist.sanbi.org).