Home » TYPES » Herbs » Chlorophytum krookianum inflorescence
Back to Category Overview
Total images in all categories: 11,538
Total number of hits on all images: 6,618,322 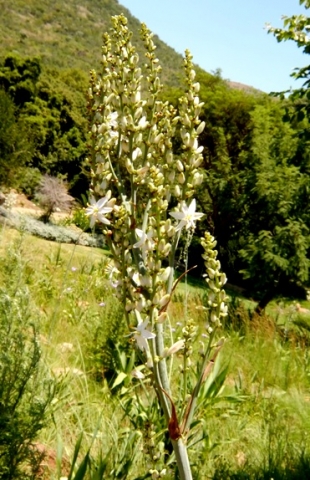 The inflorescence of Chlorophytum krookianum is a panicle growing at the top of a long scape. Several racemes branch from the sturdy central stalk and grow erectly, fairly close together. This produces a multi-flowered effect, although each flower lasts for only a day. A few stalked flowers typically emerge at each node, the stalks bending in the middle.

The six white tepals of each flower are about oblong and spreading, arranged in two whorls of three each, consistent with lily flower shape. The six long, furrowed and curving anthers grow on white, fleshy filaments, emerging from the base of the superior, green ovary that is three-sided and stubby. In the photo triangular, brown bracts, large and dry, can be seen subtending the branches of the panicle.

Flowering happens during summer to mid-autumn. This plant was photographed in January. The fruit is an oblong capsule (Pooley, 1998; iSpot).