Home » TYPES » Herbs » Chlorophytum crispum
Back to Category Overview
Total images in all categories: 11,905
Total number of hits on all images: 7,155,973 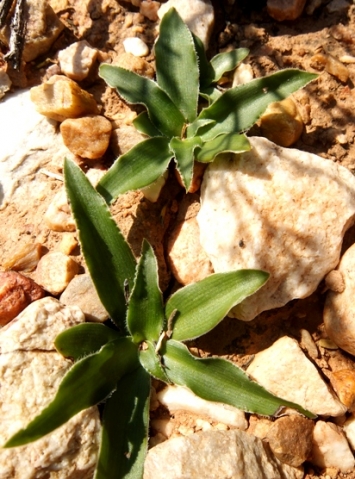 Chlorophytum crispum is a geophyte, a rhizomatous evergreen perennial growing flower stalks to 50 cm in height.

The Chlorophytum (grass lily) genus in the Anthericaceae family has about 165 species occurring in Africa, the Americas and Eurasia, often in the tropics. Some sources show Chlorophytum in the Agavaceae family.

South Africa has 36 of the species; C. crispum being one of two growing in the Little Karoo where this photo was taken. Chlorophytum flower structure has similarities to that of Aloe, but Chlorophytum produces several flowers on jointed pedicels per bract on the raceme, while each Aloe flower has its own bract.

Chlorophytum produces angular capsules, while Anthericum species, also in the Anthericaceae family and bearing white, star-shaped flowers, has rounded ones.

C. crispum has white flowers in branched panicles in spring or from spring to autumn, depending on locality. Brownish median veins are found on the tepals.

The species distribution ranges from the Little Karoo and Riversdale south of the Langeberg, eastwards to Bathurst and Alexandria in the Eastern Cape. Its habitat is shade of shrubs and trees, often at the margins of dense stands of thorny bush. The species is not considered threatened yet in its habitat early in the twenty first century (Vlok and Schutte-Vlok, 2010; Gledhill, 1981; www.redlist.sanbi.org).