Home » TYPES » Herbs » Chlorophytum capense
Back to Category Overview
Total images in all categories: 11,662
Total number of hits on all images: 6,774,659 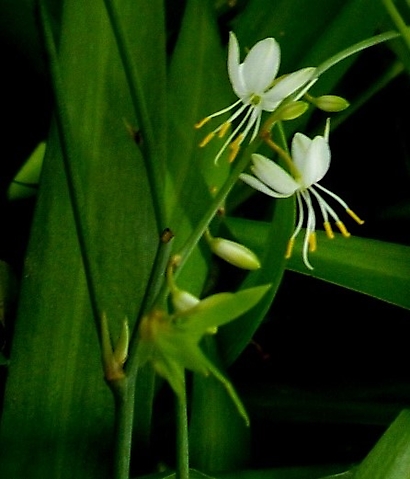 Chlorophytum capense is a tufted perennial growing from a rhizome to 1 m in height.

The basal, bright green to grey-green, smooth leaves are strap-shaped, tapering to acutely pointed tips and about 30 cm long. Small, leaf-like bracts grow in clusters at nodes on the flower stalk.

The long, branched racemes of spaced, stalked flowers appear from midspring to autumn. The star-shaped white flowers have corollas of six spreading to recurved tepals. There is a grey-brown stripe down the centre of the outer tepal surface, darker on older flowers.

The six stamens have thin, oblong, yellow anthers. The white style is longer than the stamens.

The species distribution is coastal in the Eastern Cape between Humansdorp and Port Elizabeth. The habitat is grassland and scrubveld. The species is not considered to be threatened in its habitat early in the twenty first century (Bond and Goldblatt, 1984; iNaturalist; http://redlist.sanbi.org).