Home » TYPES » Herbs » Chascanum cernuum
Back to Category Overview
Total images in all categories: 11,792
Total number of hits on all images: 6,949,253 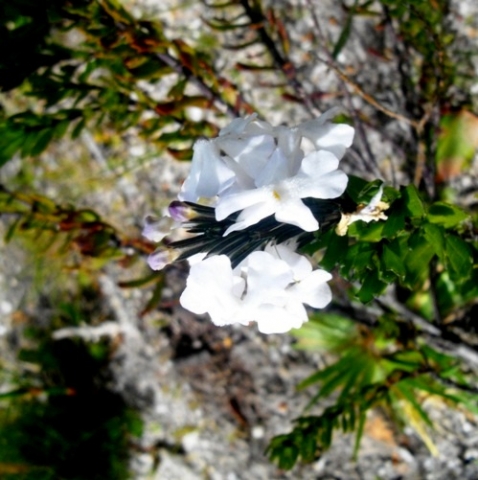 Chascanum cernuum is a much-branched, erect perennial growing to heights from 30 cm to 60 cm. The leaves are oblong or obovate and leathery, toothed at the tips.

The flowers are white, sometimes tinged with pink or mauve. There is a green five-pointed calyx at the base of the long flower tube. The spreading and wavy corolla lobes broaden into two rounded segments at their tips. Two unequal pairs of stamens are hidden inside the tube. Flowering happens from mid-autumn to early spring.

The species is distributed along the south coast from the Cape Peninsula to the southern Cape, as well as inland to the Little Karoo.

The habitat includes sandstone fynbos, karoid scrub and rocky flats. The species is not considered to be threatened in its habitat early in the twenty first century (Bond and Goldblatt, 1984; www.plantzafrica.com; http://redlist.sanbi.org).