Home » TYPES » Herbs » Asystasia gangetica subsp. micrantha
Back to Category Overview
Total images in all categories: 12,078
Total number of hits on all images: 7,371,447 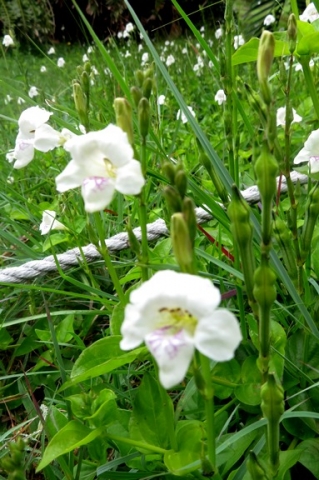 The stems root at the nodes, sometimes too energetically for some gardener tastes and invade, a particular problem in tropical regions, including some of the Pacific islands.

The subspecies distribution in South Africa is in the east of the country, from the Eastern Cape to KwaZulu-Natal and inland in Mpumalanga and Limpopo. The plant is also common in big parts of tropical Africa and Asia, although the Asian plant usually has pink flowers. This is the only subspecies of A. gangetica occurring in South Africa. The specific name, gangetica, is derived from the Ganges River in India.

The habitat is woodland and forest, the plants thriving in semi-shade. The subspecies is not considered to be threatened in its habitat early in the twenty first century.

This fast-growing, long-flowering plant is not only welcome in some flower gardens but eaten as a spinach. Beetles eat the flowers, while butterflies and black ants are keen visitors (Pooley, 1998; Leistner, (Ed.), 2000; iNaturalist; http://pza.sanbi.org; http://redlist.sanbi.org).