Home » TYPES » Herbs » Asclepias macropus
Back to Category Overview
Total images in all categories: 11,419
Total number of hits on all images: 6,200,437 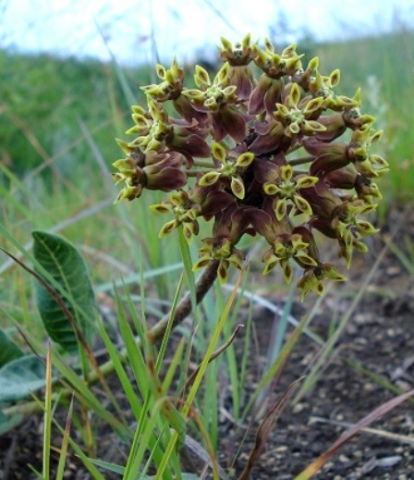 Asclepias macropus is a perennial that usually sprawls with decumbent stems branching from the base. The slightly hairy stems have opposite leaf pairs, sometimes well spaced, also hairy and on both surfaces.

The leaves are short-stalked and have entire margins. The leaf shape is ovate with a conspicuous cream coloured midrib and parallel lateral veins curving in before they reach the margin. Leaves are from 2 cm to 7 cm in length.

The species distribution lies in the eastern inland parts of South Africa from the north of the Eastern Cape along the Free State, KwaZulu-Natal and Lesotho into Mpumalanga. This specimen was photographed in January near Underberg in KwaZulu-Natal.

The plant's habitat is sour grassland at elevations from 900 m to 2000 m. The species is not considered to be threatened in its habitat early in the twenty first century (Pooley, 1998; JSTOR; http://redlist.sanbi.org).