Home » TYPES » Herbs » Argyrolobium speciosum
Back to Category Overview
Total images in all categories: 11,632
Total number of hits on all images: 6,749,679 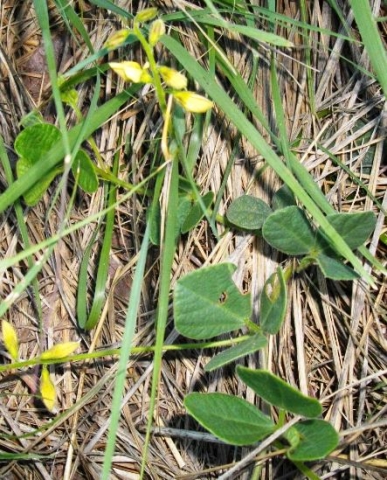 Argyrolobium speciosum, the liquorice bean or in Afrikaans soethoutbossie (little sweet wood bush), is a perennial herb with one or more erect stems.

The leaves are trifoliolate and the leaflets are broadly ovate with rounded or attenuating tips. Their margins are entire and there are undulations on the bluish green leaf surfaces from the lateral and net-veining.

The flowers are yellow, the inflorescence a dense terminal raceme. The calyx is two-lipped, the lower three sepals are joined. The corolla shows a hint of orange and noticeable veining on the yellow surface. Blooming occurs in late spring.

The plant occurs widely in South Africa north of the Vaal River, except in the west. It also grows in the Eastern Cape, KwaZulu-Natal and Swaziland.

The habitat is forest terrain. The species is not considered to be threatened in its habitat early in the twenty first century (Germishuizen and Fabian, 1982; http://redlist.sanbi.org).