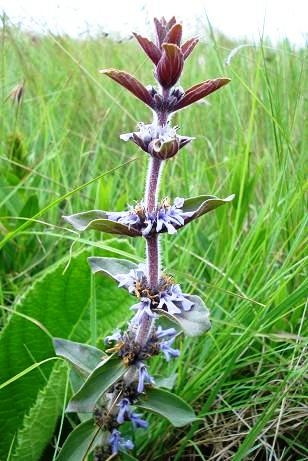 Ajuga ophrydis, commonly known as bugle weed or bugle plant, is a low-growing, tufted perennial growing from a short rhizome, reaching heights from 6 cm to 25 cm. This is the only member of its worldwide genus of over 100 species in the Lamiaceae or mint family occurring in South Africa. Several Ajuga species have medicinal properties.

The usually hairy and thick leaves grow mostly in a basal rosette. The leaf-shape is obovate or paddle-shaped, the margins irregularly and coarsely toothed. The leaves become from 3 cm to 17 cm long and from 1,5 cm to 4 cm wide.

The plant bears spikes of paired, small blue, mauve or white flowers that appear on stem leaves or bracts that reduce in size higher up along the stem. Flowering happens from before midspring to summer.

The species distribution ranges from the Eastern Cape across KZN and the Free State to Gauteng and Mpumalanga, as well as in Lesotho and Swaziland.

The habitat is summer rainfall grassland from the coast to elevations around 2700 m. The plant is not considered to be threatened in its habitat early in the twenty first century (Manning 2009; Pooley, 1998; http://redlist.sanbi.org).