Home » TYPES » Herbs » Acrotome inflata
Back to Category Overview
Total images in all categories: 12,068
Total number of hits on all images: 7,363,141 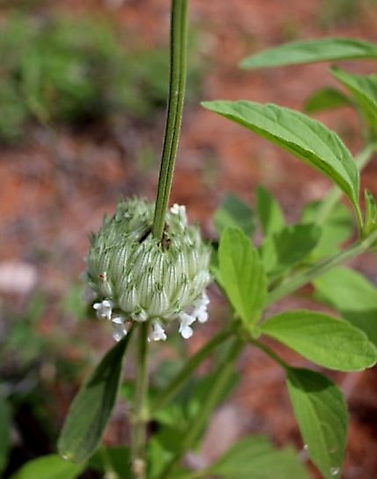 Acrotome inflata, commonly known as tumbleweed, is a slender, erect annual reaching heights from 15 cm to 1 m. The adpressed hairs on the stems point downwards.

The simple leaves are stalked, growing in whorls. The leaves are lanceolate in shape and variable in length with bluntly toothed margins and softly hairy surfaces. The ascending, lateral veins and leaf midrib are sunken on the upper surface.

The stalkless flowers grow in spherical clusters from leaf axils, spaced up the stems. The spine-tipped calyx lobes cover much of the white to pale mauve corolla tube. The flowers are small, their corollas two-lipped. The upper lip is one-lobed and erect, the lower one three-lobed and protruding (porrect).

There are four stamens. The ovary is four-lobed, the stamens and style included in the corolla tube. Flowering happens late in summer. The fruit is an ovoid nutlet.

The species distribution is widespread in southern Africa, occurring in all South African provinces apart from the Western Cape and KwaZulu-Natal.

The habitat is open, sandy places where the rainfall in some parts is low. The plants often become weedy along roadsides and where the soil has been disturbed (Van Rooyen and Van Rooyen, 2019; Van Wyk and Malan, 1997; Germishuizen and Fabian, 1982; http://redlist.sanbi.org).