Home » GENERA H » Helichrysum » Helichrysum umbraculigerum
Back to Category Overview
Total images in all categories: 11,792
Total number of hits on all images: 6,949,255 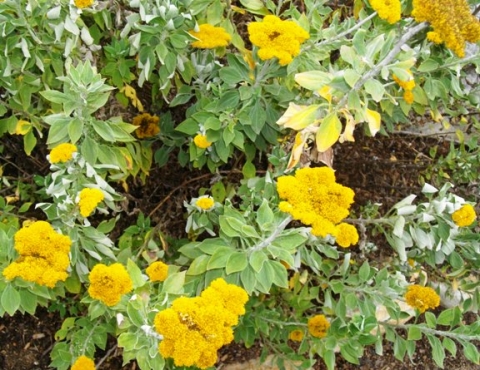 Helichrysum umbraculigerum, the woolly umbrella Helichrysum or kerriekruie in Afrikaans is a fast growing perennial.

The leaves are green on the upper surface but white and woolly below. The leaf shape is ovate with pointy tips (at least on the specimen in picture). They may be sessile or have short petioles. There are, however, much variation in the leaf shape of the five forms of this plant found in different regions within its distribution area.

The flowers are wide, flat and mustard yellow with woolly undersides of the involucral bracts. The flower shape is said to resemble an umbrella; hence the scientific as well as the English common name. Each flower consists of a large number of disc florets. The flowers are irregular in shape, becoming darker, golden as they age. The plant grows to a height of 1 m and spreads to about the same width from its multitude of densely branched stems, many being decumbent and rooting.

The plants grow in the Eastern Highlands of Zimbabwe and southwards in the Eastern Cape to the Zuurberg area. It grows mainly in open grassland, stream banks, forest edges and the (eastern) Karoo scrub.

This plant, as well as several other Helchrysums, is used medicinally by indigenous populations. The plant is a good garden subject and the long-lasting (everlasting?) flowers are used as cut-flowers. The plant is grown from stem and tip cuttings (www.plantzafrica.com; JSTOR).