Home » GENERA H » Helichrysum » Helichrysum sutherlandii
Back to Category Overview
Total images in all categories: 11,779
Total number of hits on all images: 6,931,961 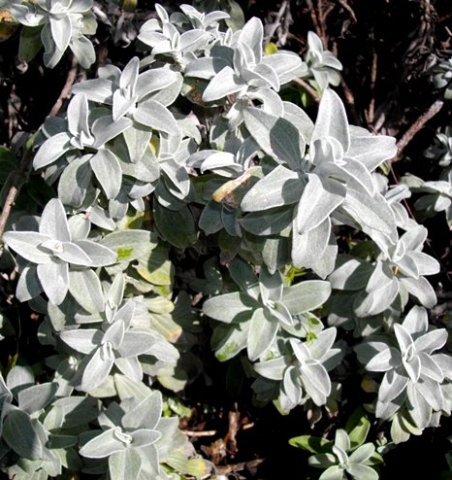 The ovate to elliptic grey leaves are alternate and stalkless, clasping the stems and crowding near stem-tips, but spaced on the flower stalks. Woolly or hairless on top, the leaves are felted below. The leaf midribs are conspicuous, the two lateral veins also prominent on lower surfaces. Leaf dimensions are about 25 mm by 12 mm.

The distribution of this plant is in KwaZulu-Natal and Lesotho, just spilling over into the north of the Eastern Cape, the east of the Free State and the south of Mpumalanga.

The habitat is rocky outcrops and cliffs at elevations from 800 m to 2700 m where the plants tend to hang over rock-faces, often near waterfalls. The species is not considered to be threatened in its habitat early in the twenty first century (Pooley; 1998; Trauseld, 1969; JSTOR; www.redlist.sanbi.org).