Home » GENERA G-H » Helichrysum » Helichrysum patulum seeding
Back to Category Overview
Total images in all categories: 11,506
Total number of hits on all images: 6,488,610 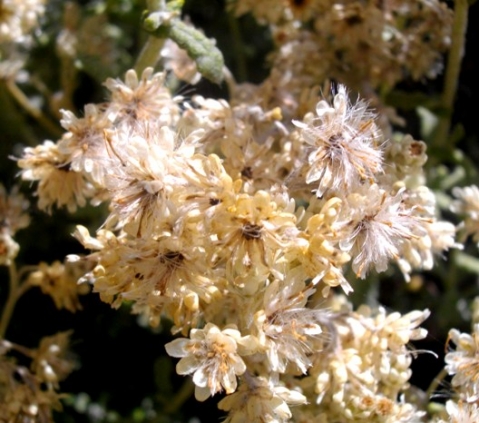 When the flower of Helichrysum patulum reaches the end of its cycle, the hair-like, spreading pappus bristles on the top of the formed seeds are in evidence. Pappus means old man, referring to the characteristic white hairs found on Asteraceae seeds. The parachute-like structure assists seed dispersal by wind. In the case of this species a modified disc floret forms the pappus.

Helichrysum flowers have dry, papery or straw-like involucral bracts that last longer than petals and sepals containing moisture. Although not quite everlasting as the eponymous common name suggests, the feature of flower durability is notable in many species of this genus (Manning, 2007; Bean and Johns, 2005).