Home » GENERA H » Helichrysum » Helichrysum marginatum
Back to Category Overview
Total images in all categories: 11,912
Total number of hits on all images: 7,163,184 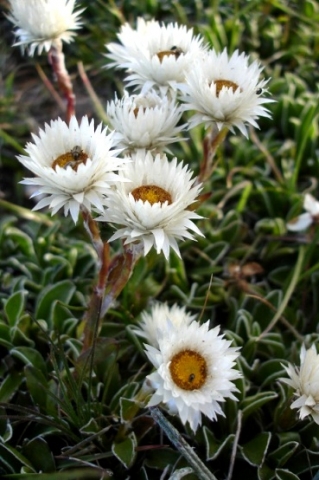 The flowerheads of Helichrysum marginatum are borne on long leafy stems growing from branch tips, up to 15 cm above the leaves. Leaves found on the flower stems are similar to the basal ones, but decreasing in size on the way up.

The involucral bracts around the flowerheads are white and pointed, occurring in up to ten rows. The bracts are said to have crimson spots on the inside. The flowerhead reaches a diameter of more than 2 cm. Flowerhead centres are yellow, later brown. There are dry scales at the base of the receptacle under the flowerhead. The achene or fruit carries many bristles in its pappus.

This plant was found flowering in the east of Lesotho near the KwaZulu-Natal border during January (JSTOR; www.keys.lucidcentral.org).