Home » GENERA G-H » Helichrysum » Helichrysum lineatum
Back to Category Overview
Total images in all categories: 11,506
Total number of hits on all images: 6,499,253 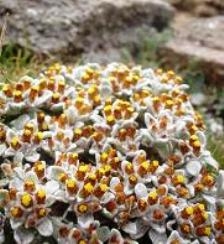 Helichrysum lineatum belongs to the group of straw flowers or everlastings. In Afrikaans they are called sewejaartjies, meaning seven little years! Many of these plants have pretty flowers that have been much harvested, sometimes without sufficient concern for the survival of (some of) the species. Everlastings are still popular cut flowers for their characteristic of lasting long (forever!), with no water in the vase.

It is ironic that even everlastings have developed survival problems due to the habits of humans. The allure of their flowerheads lies more in the non-withering rows of papery involucral bracts than the actual flowers, the yellow disc centres of multiple tiny florets. The advent of nature reserves, parks and sanctuaries throughout the world where controlled access allows enjoyment without destruction, has brought some relief for marginalised species and deserves support.

There are several hundred species in the Helichrysum genus growing in many parts of the world. Many beautifully flowering and interesting ones are indigenous in or endemic to South Africa.