Home » GENERA H » Helichrysum » Helichrysum hebelepis
Back to Category Overview
Total images in all categories: 11,656
Total number of hits on all images: 6,771,286 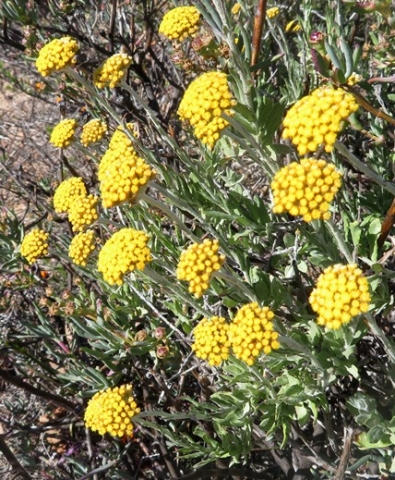 Helichrysum hebelepis is a branched perennial forming a rounded bush from a woody stem base, reaching heights from 30 cm to 50 cm, occasionally 1,5 m.

The species occurs widespread in the west of the Northern Cape from the Richtersveld and Namaqualand southwards to the Western Cape as far as Clanwilliam and Worcester. The photo was taken at Naries west of Springbok.

The plants grow in dry montane areas and flats on stony ground among various vegetation types, mainly succulent Karoo, fynbos and coastal scrub. The species is not considered to be threatened in its habitat early in the twenty first century (Le Roux, et al, 2005; Bond and Goldblatt, 1984; JSTOR; iNaturalist; http://redlist.sanbi.org).