Home » GENERA H » Helichrysum » Helichrysum
Back to Category Overview
Total images in all categories: 11,635
Total number of hits on all images: 6,752,925 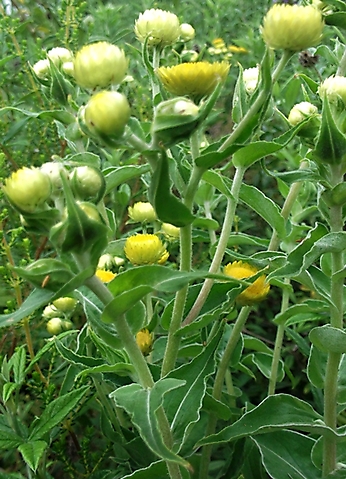 Helichrysum is a genus of annual, biennial and perennial herbs and shrublets in the Asteraceae family. Some plants are erect, others prostate and spreading.

The alternate leaves are variously shaped, the blades flat or with rolled under and entire margins.

The flowerheads grow solitary or in flat-topped clusters at stem-tips. The peduncles vary in length and are sometimes glandular. The bell-shaped involucres consist of several rings of papery or chaffy bracts, sometimes variable between inner and outer ones. The smooth or honeycombed receptacle has no scales but may be fringed.

In the disc one or more rows of marginal florets are female and tubular around the five-lobed, bisexual ones, also tubular or funnel-shaped. A great variety of involucre and floret colours occur in the many species.

The anthers are tailed, the styles are tufted and truncated, the stigmas separated. The fruits are smooth or hairy, the pappus consisting of bristly hairs.

There are about 600 species, most of which occur in Africa, although there are some in Europe, Asia, Australia and on some islands. Southern Africa has about 244 species.

Several species yield soft, woolly, felted or cobwebby leaf and stem material used by people as bedding when sleeping in the veld. Several of the plants feature in traditional medicine and in horticulture.

The plant in picture is Helichrysum foetidum in its second and final, flowering season (Leistner, (Ed.), 2000; Manning, 2007).