Home » GENERA H » Helichrysum » Helichrysum foetidum white to yellow
Back to Category Overview
Total images in all categories: 11,792
Total number of hits on all images: 6,949,352 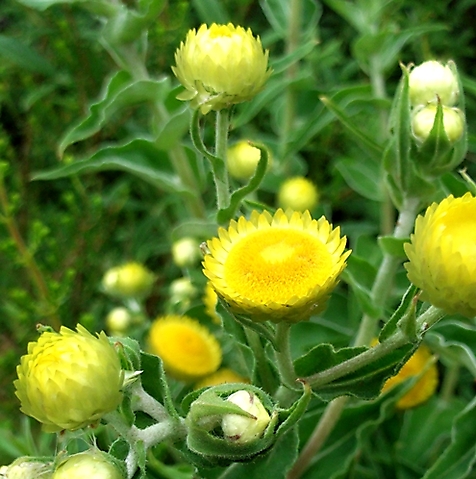 Buds and open Helichrysum foetidum flowerheads in various stages of development reveal their colour change. The buds initially have pale grey, white, greenish or silvery involucres or stages of those in sequence. Peduncle elongation prevents upper leaves from covering flowerhead faces once they are open.

The yellow colouring appears when the top opens, revealing the multitudes of tiny florets enveloped by the involucre. A little yellow also appears at the tips of the inner bracts once they mature, spreading widely later. Old flowerhead involucres pale to straw-colour.

The Helichrysum genus is in name twice linked to the dominant colour in many of their flowerheads: Derived from the Greek words helios meaning the sun and chrusos meaning gold, Helichrysum plants often live up to their association with sunlight and gold, although not all flower yellow (Privett and Lutzeyer, 2010; Manning, 2007; iNaturalist).