Home » GENERA H » Helichrysum » Helichrysum foetidum
Back to Category Overview
Total images in all categories: 12,081
Total number of hits on all images: 7,379,500 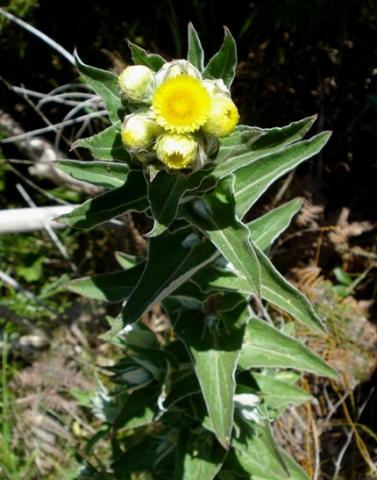 Helichrysum foetidum is an erect herb growing to 1 m in height. The vigorous upper stem in picture is well covered in healthy leaves.

The pointed, dark green leaves have white midribs and margins; the grey-woolly lower leaf surfaces end in the white margins. Leaf margins are entire, here sporadically undulating. The lateral veins are much fainter than the midrib. They ascend towards the leaf-tips about halfway across the blade halves, becoming almost parallel between the margins and the midribs.

The species distribution is in the Western Cape from the Cederberg to the Cape Peninsula and eastwards to the Eastern Cape as far as the Katberg and Amathole Mountains.

The plant's habitat is damp rocky slopes, often near streams and along forest margins or on disturbed ground. The species is not considered to be threatened in its habitat early in the twenty first century (Manning, 2007; http://redlist.sanbi.org).