Home » GENERA H » Helichrysum » Helichrysum foetidum stem-tip
Back to Category Overview
Total images in all categories: 11,656
Total number of hits on all images: 6,771,288 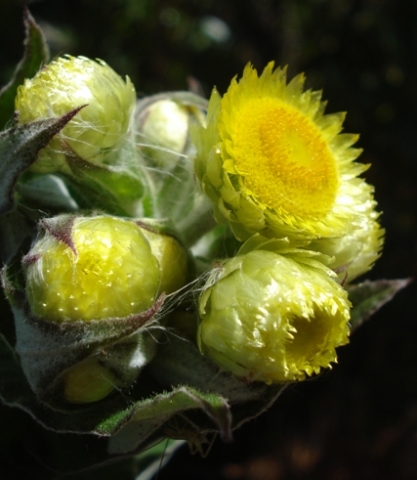 The flowerheads of Helichrysum foetidum grow solitary or in a cluster at a stem tip as in the photo. The creamy green to pale yellow involucral bracts of each flowerhead taper to acutely pointed tips. They are dry and papery but form an important part of the floral appearance in this and other everlastings.

A ring of tiny open florets is formed upon the yellow disc of the open flowerhead in the photo. Outside the ring the florets have already opened; in the centre this still has to happen.

The inner involucral bracts of the open flowerhead point outwards, while those on the buds next door are still bent inwards, covering a multitude of developing florets in this cosy neighbouring of flowerheads. A flowerhead spreads from between 1,5 cm to 2,5 cm in diameter. The narrowly pointed leaf tips, rough, red, hairy and keeled, curve intimately among the flowerheads.

The stalks of the maturing flowerheads may still become a little longer than seen here, presenting their circular landing sites a little further apart to the pollinators. Judging from the cobweb signs present, some of these service providers may come to grief if the resident spider feels peckish. A long-legged observer in the shade below is contemplating the situation. In the global village where so many eyes are always looking, solitude isn't what it used to be.