Home » GENERA H » Helichrysum » Helichrysum foetidum after two seasons
Back to Category Overview
Total images in all categories: 12,081
Total number of hits on all images: 7,379,565 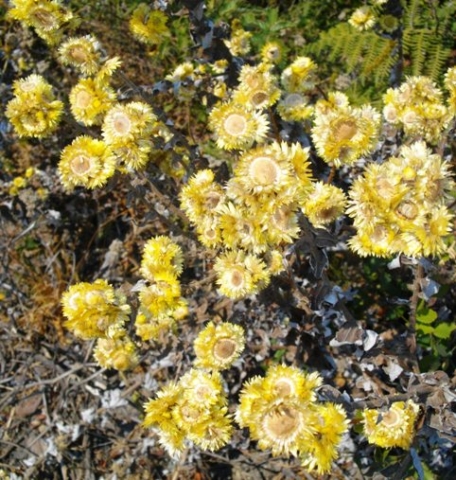 Helichrysum foetidum completes its lifecycle over two years. A biennial plant grows the vegetative parts like leaves, stems and roots in its first year, followed by winter. During this resting phase in the cold it prepares for the final burst of performance, like the sprint at the end of a distance race. By this time the stem is usually still short, the leaves only in a basal rosette.

When its second spring arrives, all is ready for a strong, tall stem to bolt from the base. The stem presents flowers and especially seed at a decent height for pollination and seed dispersal in the particular way the plant is adapted for. When the seed is delivered the plant dies fulfilled, life’s purpose accomplished. Some vegetables like beetroot and carrots are familiar examples of biennials. If they aren't eaten during their first season, they will flower and seed during the second.

The plant seen here is already dead, but as an everlasting its remains last for a while longer, although not forever. Some people try to be everlasting too: cluttering the environment with tombstones, pyramids or works good and bad to be remembered by (Wikipedia).