Home » GENERA G-H » Helichrysum » Helichrysum ecklonis
Back to Category Overview
Total images in all categories: 11,506
Total number of hits on all images: 6,479,105 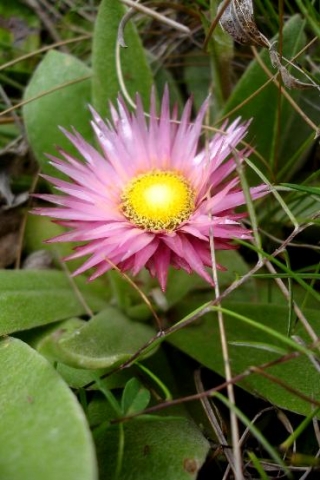 Helichrysum ecklonis, the large pink strawflower, is a perennial herb growing to 50 cm. It branches to form rosettes of oblong to elliptic leaves. The leaves are often densely woolly on both surfaces. When they are not hairy on their upper surfaces, the three to five leaf veins are clearly visible.

The distribution of H. ecklonis is widespread in the east of South Africa and in Lesotho, often on grassy slopes from the coast to the Drakensberg. This plant was photographed in January in KwaZulu-Natal near the Lesotho border (iSpot; Manning, 2009).