Home » GENERA H » Helichrysum » Helichrysum dasyanthum
Back to Category Overview
Total images in all categories: 12,061
Total number of hits on all images: 7,360,057 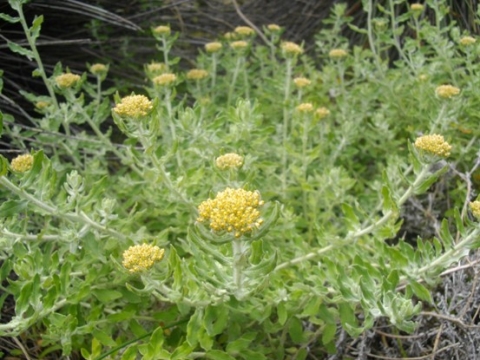 Helichrysum dasyanthum, commonly the fynbos everlasting, is a straggling, woolly green shrub that may grow to 1,5 m and spreads wider than that. The stems branch much; the young ones tending to be erect. The leaves are narrow, woolly and grey, their margins rolled under.

The species distribution is in a broad strip along the Western Cape south and west coasts, northwards to Namaqualand into the Northern Cape and eastwards into the Eastern Cape as far as Baviaanskloof and at the coast. There is also a small, discrete area in southern Namibia, just north of the Richtersveld where a population of this species grows.

The habitat is dune scrub and fynbos on coastal flats and lower slopes in sandy and rocky places. The species is not considered to be threatened in its habitat early in the twenty first century (Manning, 2007; Bond and Goldblatt, 1984; iNaturalist; http://redlist.sanbi.org).