Home » GENERA G-H » Helichrysum » Helichrysum dasyanthum leaves and clusters of heads
Back to Category Overview
Total images in all categories: 11,411
Total number of hits on all images: 6,178,303 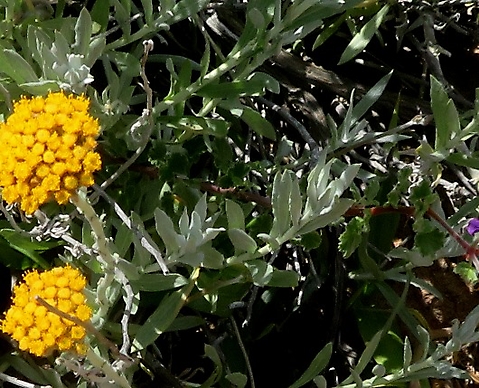 The leaves of Helichrysum dasyanthum may have uneven margins as in picture. The leaves near stem-tips are more closely spaced than those lower down, here also wider and shorter. The long, stem-tip peduncles have small, half-heartedly developed leaves, other priorities taking precedence.

Open disc florets around the margins of the heads have tall protrusions that should be styles topped by stigmas. This is so as the species bears disciform rather than discoid heads, meaning they have rings of female outer florets around the fertile, bisexual ones (Manning, 2007; Bond and Goldblatt, 1984; Privett and Lutzeyer, 2010; iNaturalist).