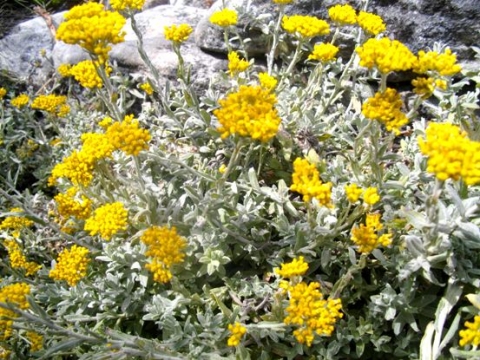 The flowerheads of Helichrysum cymosum subsp. cymosum grow on erect stalks, well above the foliage of the rounded, spreading shrub. A big bush may appear almost flat on top.

Full sun in the summer season makes the plant look pale grey all over, apart from the bright yellow of the flowerhead clusters. The photo was taken in March on Table Mountain, the plant fully exposed, flowering at the end of a long, dry season.

This species does not resprout after a veld fire, meaning new plants grow from unburnt seeds (Vlok and Schutte-Vlok, 2010; Manning, 2007).