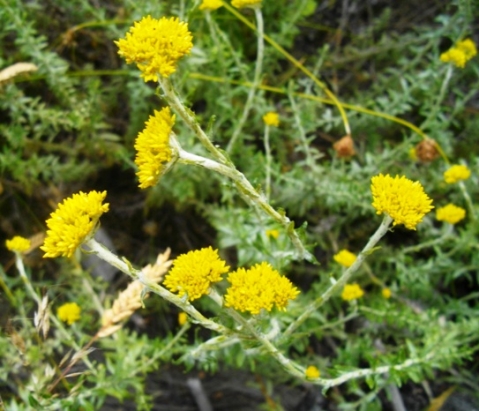 Mature Helichrysum cymosum subsp. cymosum shrubs may spread to 1 m in diameter. The many young branch-tips tend to the vertical though, the flat inflorescences appearing at the tips of upright stems. Younger plants appear more erect before the spreading commences. This young Fernkloof plant with its straggling tangle of stems not exposed to full sun all day, looks much greener than one might expect of the species in midsummer.

There are white velvety stems with sparsely scattered alternate leaves up to the flowerheads. Leaf margins are slightly rolled under.

The individual flowerheads forming large, showy, flat-topped inflorescences are narrowly cylindrical, each encircled by yellow bracts. The discoid (fertile) flowerhead comprises a dense cluster of bisexual florets, or also has some female ones around the margin of the disc in a disciform head (Vlok and Schutte-Vlok, 2010; Manning, 2007).