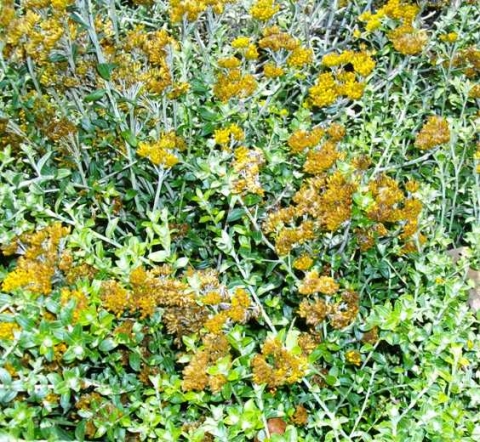 Helichrysum cymosum subsp. cymosum, the geelsewejaartjie in Afrikaans, is a straggling, much-branched, woolly shrublet that grows to about 60 cm in height.

The narrowly ovate to elliptical leaves are silky above and white-felted below. The flat-topped inflorescences of multiple, small flowerheads appear from spring to after midautumn.

This plant grows in the Western and Eastern Cape, as well as in KwaZulu-Natal.

The habitat is sandy slopes, fynbos and scrub. The species is not considered to be threatened in its habitat early in the twenty first century (Manning, 2007; Bond and Goldblatt, 1984; http://redlist.sanbi.org).