Home » GENERA H » Helichrysum » Helichrysum crispum
Back to Category Overview
Total images in all categories: 12,068
Total number of hits on all images: 7,363,054 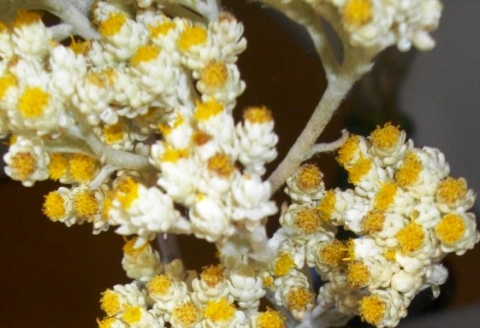 Helichrysum crispum, another soft plant with ample foliage known as kooigoed (bedding), is a sprawling perennial that grows to 60 cm. It used to be known as H. crassifolium (thick leaves). The stem-clasping leaves are silky-woolly, about 3,5 cm long and 1,2 cm wide and wider towards their tips. Crispum means crisped, irregularly waved and twisted, kinky or curled.

The flowerheads, borne in profusion during spring and early summer, become about 5 mm in diameter. The involucral bracts surrounding the yellow centres are white and spreading, curving inwards in cowl-shape near their tips.

The distribution of the species is along the coast from Bloubergstrand to George. The habitat is scrub on dunes and flats in sandy soil (Privett and Lutzeyer, 2010; Bond and Goldblatt, 1984; Andrew, 2012).