Home » GENERA H » Helichrysum » Helichrysum cochleariforme
Back to Category Overview
Total images in all categories: 11,912
Total number of hits on all images: 7,163,101 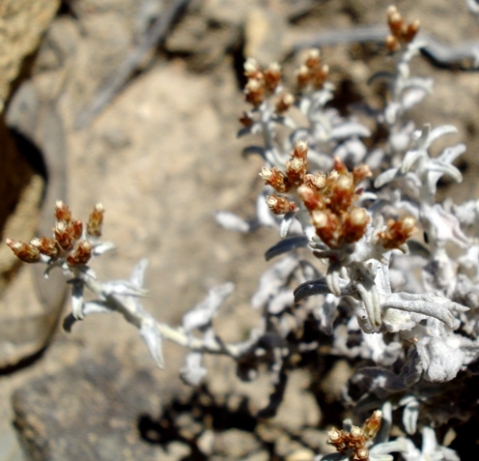 The leaves and stems are grey-woolly to greenish grey. The alternate, narrow leaves broaden to their tips and fold in on the sides. The specific name, cochleariforme, is from the Greek meaning shaped like a snail shell.

The small flowerheads have rows of golden-brown involucral bracts, the inner ring white at the tips around the yellow disc florets. Flowering happens in spring to early summer.

The distribution is in the Western Cape, partly on the west coast from Piketberg to Darling and along the south coast from Bredasdorp to Mossel Bay. This plant was photographed near Riebeek West. The habitat is coastal scrub on dunes and flats in sandy soils.

The species is near threatened in its habitat early in the twenty first century due to coastal development and invasive alien trees (Manning, 2007; Bond and Goldblatt, 1984; iSpot; Andrew, 2012; www.redlist.sanbi.org).